I want to share a story that shows the power of an effective PLN.

In a previous post, “proof and consequences: circular reasoning“, I begged for help solving a problem with students struggling to see their own logical crisis that was leading to predictable and consistent problems.

Several people reached out to me with suggestions. Thanks for that. I would like to highlight one specific suggestion that I tried to today and it worked just exactly as the designer predicted.

The suggestion was made by @nerdypoo.

So, here’s a portion of what she sent back.

Today, I tried it in class. I began by putting up this image…

… and asking the students to vote on whether the triangles were similar, not similar, or we don’t know. Overwhelmingly most students voted that they were similar. The thoughts they articulated were mainly that they could find the legnth of the missing side (which they claimed to be 3 cm long) and then could use SSS to show a consistent scale factor.

Then I showed them this image and asked them to vote again. 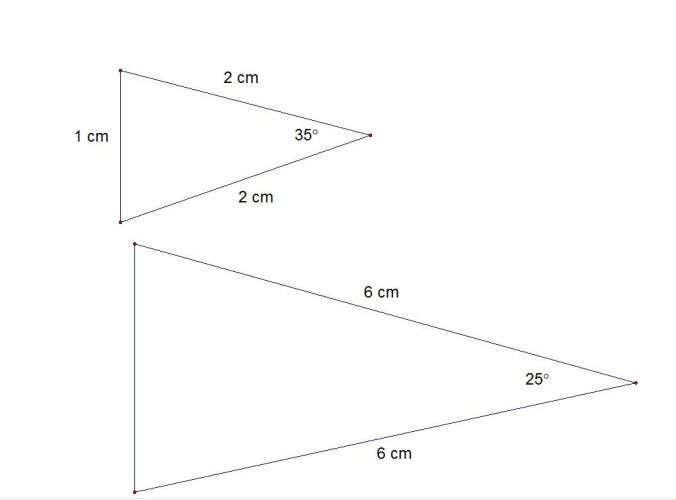 It was essential that I made sure the students knew that I wasn’t changing the situation from the first question to the second. I was simply revealing information that was hidden. Those angles were never congruent. They simply didn’t know that, but most them assumed they were. But every person who voted that the first two sets of triangles were similar were making an assumption, an assumption that they didn’t recognize before. An assumption that shouldn’t be made because sometimes it’s incorrect.

7 thoughts on “The Power of Network: Triangle Similarity”

Andrew Shauver is an instructional tech specialist, and former HS and MS math teacher in Mid-Michigan.