A tool is just that. Tools are inherently valueless. They aren’t good. They aren’t bad. They are tools. They are perfectly meaningless and useless separated from a user. This is true of classical tools as well as much more recently-invented tools. Pencils, hammers, pillows, frying pans, coffee mugs are all just tools that could be used to do productive things or destructive things.

Twitter is an example of a tool that I have found incredibly productive. The #MTBoS has helped to define and demonstrate Twitter as a tool for professional development, peer review of the goofy things that rattle around my head, and a warehouse of effective resources for the effective instruction of mathematics. However, it goes without saying that those are not the only uses that Twitter has. In fact, the general student population seems fairly inexperienced with Twitter as a academic networking tool. Their use of Twitter has been largely social, which isn’t necessarily bad, but reflects a missed opportunity to take advantage of a resource that could be helpful and supportive.

Last night, I got to see this on full display. I ran my first (EVER!) Twitter review with my geometry students. I invited the students on for an hour and tried to lead a Twitter discussion. It’s the first time I’ve ever done that and it was the first experience many of the students had had with that type of reviewing structure.

But then this happened (I apologize for the grainy photos. I’m still working on learning some photo editing software… that blurring out trick would be killer! Anyway… ):
It started with a question that I tossed out in response to a student’s statement of confusion:

Then that student-to-student started happening…

Notice what happened: The student got some advice as to where to find the definitions directly from another student. Then UH-OH! The geometry binder got left at school. But this is the 21st Century! That is TOTALLY not a problem, because… 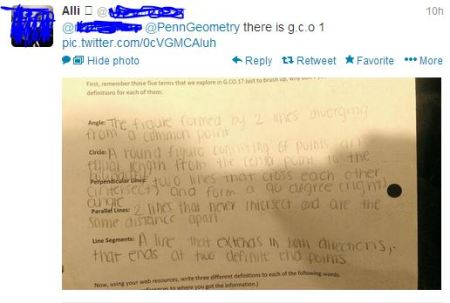 She went on to send her both sides of handout G.CO.4 as well. This is a powerful moment. It is a moment that sets a precedent. Marissa just found a resource that she can trust. Twitter is beginning to be redefined in her mind as a potential academic tool.

This is a fantastic example of what is possible. This is what we in the #MTBoS have been doing for a while now. We are used to networking, leaning on trustworthy sources, and asking for help (in 140 characters or less). Most students aren’t used to using twitter in this way. Students need to be taught how to use their networks for more than simply social needs. If the academic world is becoming more digital, then let’s take the digital world and make it academic.

Last night’s review session gave me a glimmer of twitter hope that this social media machine that is being driven by the young people in our classes can be as effective a learning tool for them as it has been for me. 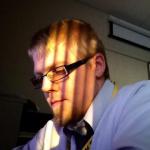 Andrew Shauver is an instructional tech specialist, and former HS and MS math teacher in Mid-Michigan.