The WordPress.com stats helper monkeys prepared a 2012 annual report for this blog.

The new Boeing 787 Dreamliner can carry about 250 passengers. This blog was viewed about 1,300 times in 2012. If it were a Dreamliner, it would take about 5 trips to carry that many people.

I’ll start here: 2012 has taught me that there is no political flagship that is holding a monopoly on the truth.

My masters class this semester was taught by an educator who introduced himself as “the most radical professor in the department.” And in his extreme “liberalism” he showed us video after video of lecturers and speakers who supported his “radical” ideas of supporting lower classes, promoting racial equality, and progressively educating in ways that support all students and give opportunities for social advancement.

Speaker after speaker. Speech after speech. Lecture after lecture. Talking about the dignity of all human beings. The talent that exists in underrepresented populations. The methods and means for effectively educating them. The results that demonstrate the effectiveness. Presented as though those beliefs were “liberal.”

And here I sat: A “conservative” mostly agreeing with all of it. The only part that I disagreed with was the part about those being “liberal” ideas. They didn’t sound like it to me. I knew “liberals”. I also knew “conservatives”. The respect for human dignity at all levels of human life from the super talented and successful to the severely disabled, from the oldest people to the very youngest people (so young they still needed to live inside the womb for a while longer) seemed to be an idea that existed among both “conservatives” and “liberals” and also was willing to be sacrificed by the most politically powerful “liberals” and “conservatives.”

So, 2012 has taught me that the “liberal” and “conservative” labels are as harmful as they are misunderstood. Calling someone a “conservative” means a lot to people who fancy themselves “liberals” because they need an enemy. The same is true for “conservatives” who label someone a “liberal.” The labels work well when the desire is to place blame.

I don’t know what I am anymore because I don’t know what those labels mean anymore. The more time that we spend working to define those words, the more time we waste that could be better spent solving problems. Good education isn’t “conservative” or “liberal.” Once again, there is no political flagship that is holding a monopoly on the truth. 2012 has taught me that there isn’t much value in pretending that it does.

I’m not convinced my work belongs on the same screen. For example:

2012 has taught me that it might not matter.
Certainly well-edited work is better, but should lack of time prohibit me from trying to engage my students with a video?

My expertise is nowhere near Dr. Tanton’s, but does that mean that I have nothing to offer?

Sure, I could borrow videos, and I do, but what kind of example am I being if I never offer any of my own creations for the community to hone? Plus, the students enjoy hearing the stories of how I thought of ideas and how I made the video.

2012 has taught me that there is value in the effort, because it isn’t just about the students learning, but I have much to learn as well. 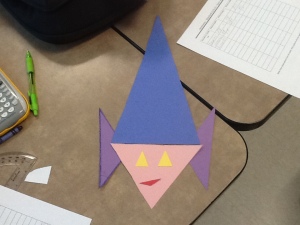 An elf made from triangles

Sir Ken Robinson has effected my teaching in a major way. In 2012, I got a chance to read Robinson’s Out of Our Minds, which is an wonderfully readable discussion on the historical background for our modern education system and how it is forcing students into an overly-left-brained way of thinking. It also provides some fantastic advice and some examples of how changing the paradigms can lead to fantastic growth.

This year, we decided to put some of Sir Ken’s advice into play. In previous years, when it was time to study triangles we would start by talking about the different classifications of triangles. Then onto theorems and then proofs. All the while, the only triangles the students were looking at where pictures out of the textbook. The problems involved writing equations and solving for variables.

This year, we started triangles by having them make triangle art. They cut out a triangle (or a few), protractor-measure the angles, ruler-measure the side lengths. Then they posted them up. We gallery-walked around an recorded 15 different measurements and then discussed.

We had powerful discussions around questions like if all you knew was a triangles angle measures, could you tell what kind of triangle it was? What is the deal with triangles who angle measures don’t add up to 180 degrees?

So, what accounted for the change? I think that there is a huge rush to make our classes academic. As if that were a badge of honor. I think math teachers fall prey to this temptation more than most (although I don’t have a ton of data on that). But most of our students aren’t academic in the sense that we are thinking. Academic, to most, evokes this image of someone who appreciates the value of reading dry texts, preparing for tests, and doing homework. It isn’t necessarily that they enjoy it, although they might. But they understand the value of it all.

2012 has taught me that my students don’t appreciate the value of things like textbooks, homework, and notebooks. So, what is my task? To help them to appreciate the value of those things? Or to help them to learn mathematics. I’ve traded out “academic” for “engaged” and “obedient” for “creative.” They are willing to take ownership of the class, which, of course makes class tougher to control at times, but that’s an adjustment I have to make.

2012 has taught me that we shouldn’t be in any hurry to grow these kids up. Let them cut with scissors and create with construction paper. Let them write their thoughts instead of writing proofs.  There is value in managing the experience of the learner (an idea I stole from a very good post from a math teacher from Chicago). It isn’t about making everything fluffy and fun, but it is about designing a class they’ll engage in. Sure, it probably isn’t as sophisticated or academic, but the students are willing. The students are engaging.

Indeed, the students are learning.

I teach in Michigan where “right-to-work” is brand new. It hasn’t even taken effect yet, that’s how new it is. Before that, the public education sector has undergone many changes to the retirement system, laws capping benefits, curriculum overhauls complete with new standardized tests, etc. The transitions are swift and seem to be ongoing.

The opinions on this are as diverse as they are extreme. From the left, it’s called “attack.” From the right, it’s called “reform.” Whatever you call it, it seems like everyone and their mother has an idea of how I should do my job, what my students ought to look like when I’m done, and how I should get compensated for the time I take to do it.

It also seems like an awful lot of educators are getting very caught up on all that attention. The fact that so much is being made of what is wrong with public education is distracting to many. At times, it is distracting to me. But 2012 has taught me this:

The job of a teacher is not to sway public opinion. In fact, it is time we stop being surprised how the public views us. It isn’t new. It isn’t even a problem just here in America. Shoot… scrutinizing society’s educators isn’t even new in this millennium.

Sometime in the 6th decade after the birth of Christ, a Jerusalem man who came to be called “James the Just” wrote a treatise after the stoning of his friend, a Christian deacon named Stephen. In his treatise, James the Just writes:

My brethren, let not many of you become teachers, knowing that we shall receive a stricter judgment.

Translation: Be cautious in becoming a teacher. You will be held to a higher standard. You will be scrutinized for more of your actions. If you can’t handle that, teaching isn’t your calling.

I do not believe that people simply do not like teachers. But we have all been taught. We all have experience in this field. Everyone can tell you with the utmost conviction a favorite teacher and a teacher who wasn’t fit to park in the parking lot. In reality, the favorite teacher might have been a dreadful educator and the hated teacher may have been very skilled and successful.

When the entire society has the means to form an opinion, the scrutiny will be intense.

2012 has taught me that there is no sense fretting over it. The more I fret over it, the more energy I am devoting to worry that won’t make me better at my work. Because if I am trying to stop something that was being commented on matter-of-factly almost two millennia ago, it doesn’t seem like I’m going to have much luck in changing it.